Limoux wine is produced around the city of Limoux in Languedoc in south-western France under four Appellation d'origine contrôlée (AOC) designations: Blanquette de Limoux, Blanquette méthode ancestrale, Crémant de Limoux and Limoux, the first three of which are sparkling wines and dominate the production around Limoux.

The main grape of the region is the Mauzac, locally known as Blanquette, followed by Chardonnay and Chenin blanc. In 2005, the Limoux AOC was created to include red wine production consisting of mostly Merlot. 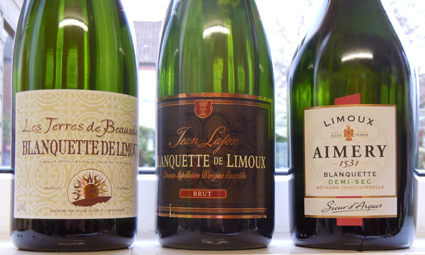 Wine historians believe that the world's first sparkling wine was produced in this region in 1531, by the monks at the abbey in Saint-Hilaire.

Blanquette de Limoux is considered to be the first sparkling white wine produced in France, created long before the Champagne region became world renowned for the sparkling wine Champagne. The first textual mention of "blanquette", from the Occitan expression for "the small white", appeared in 1531 in papers written by Benedictine monks at an abbey in Saint-Hilaire. They detail the production and distribution of Saint-Hilaire's blanquette in cork-stoppered flasks. The region's location, north of the Cork Oak forest of Catalunya, gave Limoux producers easy access to the material needed to produce secondary fermentation in the flask, which produces the bubbles necessary for sparkling wine.

Local lore suggests that Dom Pérignon learned how to produce sparkling white wine while serving in this Abbey before moving to the Champagne region and popularizing the drink,[4] but this is almost certain to be false since Dom Pérignon was involved with improving Champagne's still wines, and not the sparkling ones.

In 1938, Blanquette de Limoux became one of the first AOCs established in the Languedoc region (1936 AOCs included Muscat de Frontignan in the Languedoc and Rivesaltes, Maury, and Banyuls in the Roussillon). While the classification is recent, the wine itself has long been a traditional apéritif or dessert accompaniment in the area.