This article was originally published at ilovewine.com, which includes a link to the original article

Made entirely from the Gamay grape, Beaujolais is often produced to be consumed soon after production, traditionally in celebration of the harvest. Beaujolais Nouveau is in fact fermented for only a few weeks before being released for sale.

There are three different classifications of Beaujolais wine: Beaujolais AOC, Beaujolais Villages AOC, and Beaujolais Cru, ranked in order from cheap and cheerful to complex and charismatic.

While the neighbouring regions of Chablis, Côte d’Or, Côte Chalonnaise and Mâconnais are more highly-regarded and widely known, don’t turn your nose up at Beaujolais – and if you spot a bottle of Beaujolais Cru, don’t let it pass you by! 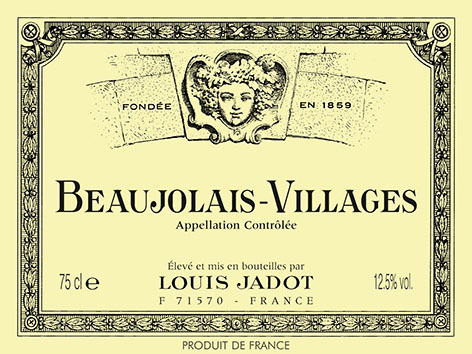 The third Thursday of every November is known as “Beaujolais Nouveau Day”, when, just a few weeks after harvest, this wine goes on sale at 12:01 am, to the delight of wine lovers around the world, who race to get their first sip of this young wine.

This type of wine has an unusual fermentation process, known as ‘semi-carbonic maceration’, where whole clusters of grapes are piled into a huge lidded vat and the weight of all the grapes crushes those at the bottom. As they are crushed, and the juices react with yeast, carbon dioxide is released and pushes any oxygen out of the vat. The lack of oxygen ultimately makes the remaining grapes explode before they begin maceration.

Beaujolais Taste Profile
When describing the Beaujolais taste profile, it is important to distinguish between the three very different types of wine, Beaujolais, Beaujolais Villages and Beaujolais Cru.

AOC: These wines have high acidity and light fruity flavours such as raspberry, cherry, and cranberry. Low tannin levels make them refreshing and easy to drink.

Villages AOC: Beaujolais Villages wines have more mineral qualities to their taste, due to the soil in which the grapes are grown, as well as stronger notes of strawberry and blackcurrant.

Cru: Although the Beaujolais Cru taste notes vary between the different winemaking villages, they often carry smoky, woody tones and darker fruit notes such as cherry and plum.

Beaujolais Food Pairings
AOC wines are light-bodied, easy to drink and great to be enjoyed in a relaxed environment with a variety of dishes. Barbeques and light lunches work well, as do fresh pasta, burgers, salad and finger food.

For Villages AOC, try this wine with chicken, turkey, pasta, pizza, quiche and fruit-based desserts that complement the berry notes in the wine.

Bottles of Cru can be enjoyed with more complex dishes such as sirloin steak and lamb. The earthy tones also pair well with richer Italian dishes such as lasagne, Bolognese, and ragu. These wines also age well, and you might want to enjoy a special vintage of Cru with a cheese board to bring out the richness of flavour.

There are 96 wine-growing villages in the Beaujolais region of France, which lies in the south of Burgundy, to the west of nearby Lyon. The 10,500 hectares region is just 34 miles long, and 7-9 miles wide. The Nizerand river runs east to west through the Beaujolais region, naturally cutting it in half and this is also important geographically for the wine growing regions, as all 10 of the villages that produce Cru lie to the north of the river. South of the river, there are only producers of AOC.

The most notable regions are those that produce Cru, a wine for which demand is steadily increasing around the world. Although the terroir of each of these regions varies, they are generally composed of granite and schist, which encourage more earthy tones such as wood and smoke and also better-growing conditions for the Gamay grapes. These regions, from north to south, are:

·         Saint-Amour: This village is known for two different styles of wine, a fruity, light-bodied bottle and also a rich, spicy variety which is better suited to aging.

·         Juliénas: Similar to Saint-Amour, Juliénas can produce both fruity notes such as peach and strawberry, but also spicier notes such as cinnamon.

·         Chénas: Wines from Chénas often have woody notes and it may be due to the fact that this small area was once covered with ancient oak forests, which were cleared to make room for vineyards.

·         Moulin-à-Vent: The thicker skins of the grapes grown in this region give the wines strong tannins and create one of the deepest, darkest Crus available. Suitable for aging, wines from Moulin-à-Vent can develop stronger tones, such as truffle and spice.

·         Fleurie: The light, floral and aromatic wines produced from this high-altitude region are easy to drink and a great introduction to red wine.

·         Chiroubles: This region can be found at the highest altitude in Beaujolais and produces smooth, silky wines which are one the last grapes to be harvested each year.

·         Morgon: Wines from the Morgon village are best enjoyed after aging for 5-10 years, at which point they will have developed rich earthy tones.

·         Régnié: Opposite to Morgon wines, Régnié wines are best enjoyed while still young and these aromatic, fruity wines are quickly gaining popularity with connoisseurs around the world.

·         Côte de Brouilly: Mount Brouilly, a nearby volcano, has a notable influence of the taste of wines from the surrounding villages, and this area has mineral notes that are well-balanced with fresh, fruity tones.

·         Brouilly: The southernmost of the Crus regions, Brouilly enjoys a little more sunshine than some of the other regions and is one of the most recognizable wine growing villages in Beaujolais. Also close to Mount Brouilly, wines from this region develop indulgent jam and red currant flavours.