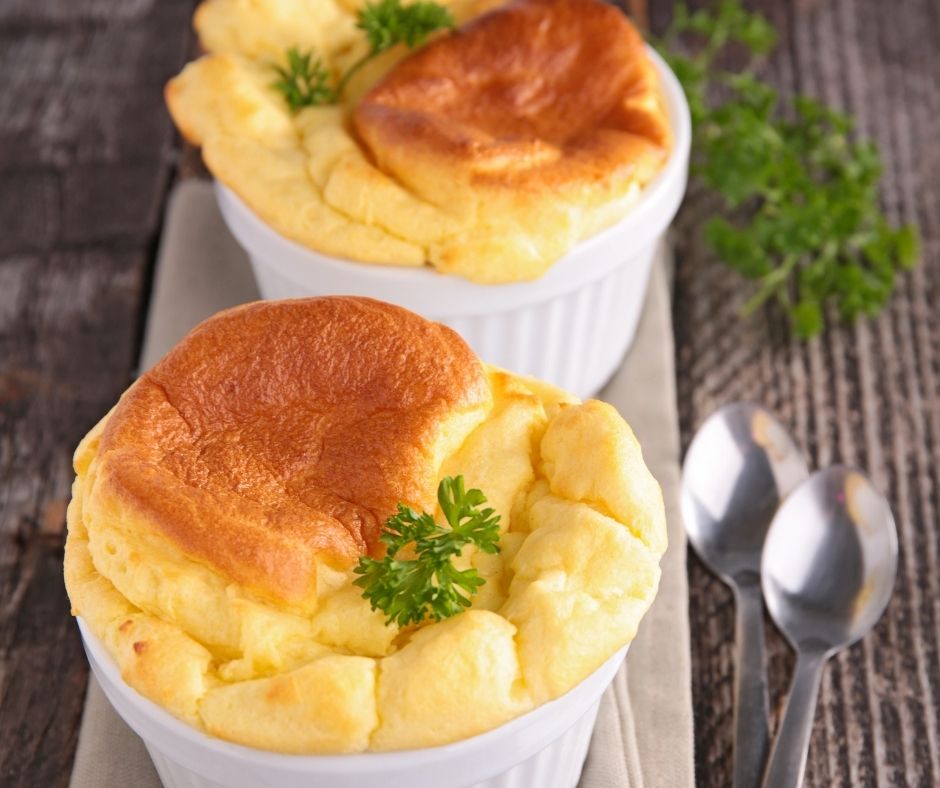 A Cheese souffle recipe or should I say, Soufflé au Fromage de Chèvre! This is such a delicious dish and very inexpensive to make too.

A hard cheese is better for your recipe and gives a good flavour. You can use something like Parmesan or if you want to try something else, a good strong blue cheese is good such as Roquefort.

If you have never made a soufflé before you may like to read a few tips that I have put together for you called Soufflé Recipe Tips. These are just to use as a guide to help you because we have all failed at some point in making them and it is usually because of some small thing that has been overlooked such as a small amount of egg yolk preventing the egg whites from becoming nice and stiff.

Take the eggs out of the refrigerator about an hour before using.

You will need a charlotte mould/tin or if not, a deep dish suitable for the oven.  A guide here is about a  2 1/2 pint/1.5 litre  soufflé dish.

Almost everyone loves a cheese souffle recipe and this one is really very easy to make and also very tasty. 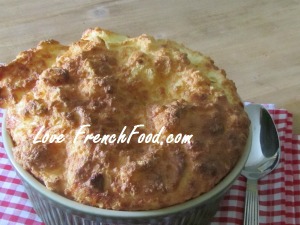 Ingredients (This recipe is for 4 - 6 people)

A good pinch of grated nutmeg

1/4 teaspoon of cream of tartar

Salt and black pepper to taste

Prepare your charlotte tin or dish by buttering it well and then sprinkle it with finely grated hard cheese such as parmesan.

Heat the milk in a pan with the bayleaf added, to just below boiling and leave aside.

Melt the butter gently in a large pan (large enough to take the egg whites later).

Add the flour and gently mix to a paste with either a wooden spoon or a small balloon whisk which is my favourite.

Continue stirring as you pour in some of the hot milk, stirring continuously.

Season with salt and pepper and the nutmeg then add the rest of the milk with the bayleaf, stirring continuously. The sauce should become nice and thick.

Remove the bayleaf, stir in the cheese and set  sauce aside until you have whisked the egg whites.

In a very clean bowl, whisk the egg whites until they become frothy, then add the cream of tartar.

Continue to whisk the egg whites until the frothy mixture becomes white and stiff and you can see the marks from the whisk in the mixture and it will stand up in peaks.

Put a large spoonful of the mixture into the sauce and gently mix thoroughly, then pour the rest of the cheese sauce over the whites, folding it in very gently with a large spoon so as not to break the air bubbles. 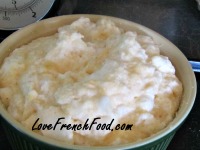 Pour the combined mixture into the buttered dish.

Place in the middle of the preheated oven and bake for about 20 minutes until it is golden brown. Leave another five minutes to allow it to set in the middle.

DO NOT OPEN THE OVEN DOOR DURING BAKING!

Remove from the oven and serve your cheese souffle recipe immediately.