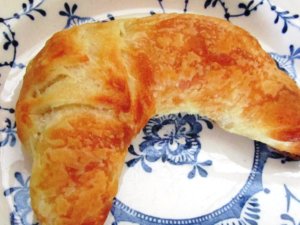 This delicious croissant recipe will give you another great French classic bread recipe to add to your favourites.

Croissants are generally eaten for breakfast in France and are often bought from the local Patisserie or the Boulangerie.

They are very easy to make, but need time for the different stages in making the dough. It is a good idea to make the dough the night before and leave it in the refrigerator ready to use the next morning, although any French baker worth his salt will tell you that it takes 48 hours to make good croissant dough...all the more reason to appreciate the effort.

Otherwise you will need a couple of hours to prepare.

That most quintessential of French of foods, the croissant, wasn't originally French at all: Marie Antoinette is said to have introduced the kipferl, a crescent-shaped Viennese pastry in the 18th century, after she arrived from Austria to marry Louis XVI.

Another claim attributes the croissant's French debut to Austrian baker August Zang, who opened a shop in Paris in the 1830s.

What is certain is that local bakers refined the pastry by making it with a yeast-leavened dough that's layered and folded several times with chilled butter. This labour-intensive routine is what gives the croissant its flaky quality, and part of what made the pastry so popular. 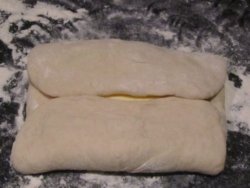 ·         Dissolve the fresh yeast in the warm milk and when completely dissolved, pour this into the well in the centre of the flour mixture. Fast action yeast can be added to the flour and then the milk mixed in after.

·         Mix all the ingredients together until you have a soft dough.

·         Now place your dough onto a floured board or surface and knead for about 5 minutes then place the dough back into the bowl and cover with plastic film or a damp teacloth.

·         Flour the butter and press it down with a rolling pin to flatten it before placing it in the centre of the dough.

·         Roll the dough into a thick oblong about 1/4 inch thick, then fold one end of the dough up and the other end down to meet in the centre.

·         Give another quarter turn and roll the dough in the other direction.

·         Wrap the dough in plastic film or foil and leave for about 2 hours or preferably overnight in the refrigerator.

To Prepare your Croissant Recipe for the oven

·         Roll out the dough to a rectangle about 11ins by 18ins and divide the dough in half lengthwise. (You may need to trim the edges a little)

·         You now need to cut out six triangles from each strip so that each one has a six inch base. (This is your croissant recipe and you don't have to have perfect triangles!)

·         Starting at the base, roll up each triangle towards the tip and brush a little beaten egg at each tip to hold it in place.

·         Place them on your baking tray, shaping them into crescent shapes.

·         Cover with cling film and leave in a warm place for about half an hour or until well puffed up.

·         Place in a preheated oven for 5 minutes, then brush them lightly with beaten egg and return to the oven for a further 3 minutes or until golden brown.

You can now serve your warm croissants either with or without butter. This croissant recipe already contains butter, so you may not want any more butter on them, but instead spread a good quality jam or fruit preserve on them instead.

Your croissants will keep for a few days if kept in an airtight tin or container, but are best warmed in a hot oven before serving.