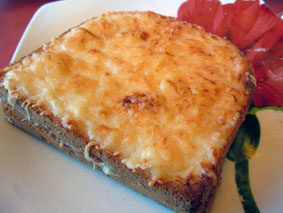 This is one of the tastiest snack meals that I know. For many years as I travelled into France, I would turn off from the early morning ferry into the town of Falaise, and stop there for a breakfast of Croque Monsieur at a town centre café; it was the most welcoming meal with which to start the day. I later learned that if you put a fried egg on top, it's called a Croque Madame.

Use Emmental rather than Gruyère; it's cheaper

Leave off the Parmesan and use more Gruyère instead.

·         On one slice of the buttered bread, spread half the grated Gruyère, then cover that with the slices of ham, folding them if need be to fit the size of the bread.

·         Sprinkle the rest of the Gruyère on top of the ham, season, then press the other slice of bread on top of that and press it down very firmly...cut off the crusts if you prefer – the French usually do, and the gastronomic 'bible' – Larousse – insists you must.

·         Melt the butter over a medium heat in a large frying pan, large enough to take the prepared croques...or do them in batches.

·         Transfer the croques to the pan and sauté in the melted butter for about 4 minutes until golden brown (but check after a couple of minutes to ensure that nothing is burning).

You can serve them at this point, but for an additional kick

·         Sprinkle the grated Parmesan over one side of the croques, and put under a grill until the Parmesan melts.