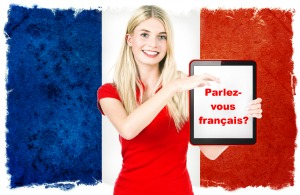 It is a beautiful language and let's face it, it is one of the most sexiest languages on the planet.

The French language is one of the world’s romantic languages and shares many features with other romance languages.

It is the official and first language in France, but did you know that it is an official language in 29 countries? That's how popular the language is all over the world.

The French language originates from the Latin languages of the Roman Empire but it has also gained some influence from the Celtic languages of Roman Gaul.    Interestingly it is one of the most commonly used languages in the European Union along with the English and German language.

It used to be the most important language between the 17th and mid-20th century for International Affairs and of course it was the most prominent language of the educated classes. Surprisingly enough it is only recently that English has taken this position.

Since the Official Languages Act of 1969, the French language is recognised in Canada on equal status with English language. In fact French is the mother tongue of about 7 million people there.

It is also recognised in many other countries; so here is just a brief outline of some of them.

There are over 300,000 French native people in the United Kingdom and the Channel Islands, making French one of the large minority languages spoken.

It is also a very popular foreign language and many people in the UK want to learn French more than any other language. About 23% of people in the United Kingdom speak French.

French is also extremely popular in the United States where it is the fourth most spoken language.

It is now projected that French will continue to be popular and that it will represent about 500 million people towards 2025 increasing again towards 2050 for about seven percent of the world’s population. This information comes from the Université Laval and the Réseau Démographie de l'Agence universitaire de la francophonie.

Will you be one of them?

There are many ways to learn a language and nowadays it is much easier than it has been in the past. You can choose from many language courses or language schools, in fact you can even learn French online!

If you would like to learn French here is a website that has Free online help for learning the French language. Includes grammar lessons, vocabulary lists, and more.