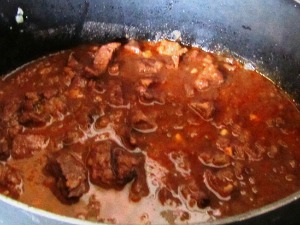 This is a Corsican meat sauce recipe or should I say Le Stufatu and it is a hearty dish from Corsica.

Corsica is a beautiful island and is a region of France just off the south coast and is well worth a visit if you ever get the chance to travel there.

Most of the traditional recipes have been handed down the generations and they would have used all local produce for everything that they ate. It is much the same today.

I call this a 'meat sauce', but in fact it is more than a sauce. The sauce can be a meal in itself as it is a good old fashioned meaty sauce cooked with red wine. So if you are wise you can plan ahead for two meals here, which is what we do with this combination. It has lots of good meat in it so is really much more than a meat sauce recipe.

You can serve it with a pasta dish which is the traditional way using spinach and a local cheese from Corsica or you can do your own thing and perhaps serve it with garlic potatoes and your favourite vegetables. Either way it is simply fantastic.

So, first here is the recipe for the meat sauce and then if you want to make the pasta dish as well to accompany it I have also given you the recipe for this with step by step instructions and some pictures to help with it.

·         Brown the onions and garlic making sure they do not brown too much.

·         Add about two glasses of warm water, the bay leaf and finally, the seasoning.

·         Simmer for about 2–3 hours until the meat is tender. You may need a little more water if the sauce has reduced too much.

You now have a wonderful sauce, although it is more than a sauce, the meat will make a hearty dish in itself. This sauce can be made with most meats but beef has been used for this recipe.

As I have said earlier you can choose whatever you like to accompany this meat sauce recipe such as garlic potatoes with vegetables or a pasta dish.

If you want to be more traditional and make a complete Corsican dish then a pasta dish would be the best choice. A dish of Les Ravioli au Brocciu is a good choice and you can see for yourself as I have made it with all the step by step instructions for you to try it.