which oil to use for cooking

Choosing the right oil to cook with is a serious business. Some years ago I spent time in Grasse and Nice, where I was told in no uncertain terms never to cook with olive oil because all the goodness went ‘up the chimney’ in the cooking, and that the best olive oils should be reserved to flavour salads, etc.. See Mediterranean diet.

Then on television you see all the celebrity chefs cooking with olive oil. So, how do you decide?

Part of the problem is that when it comes to oils, we have so much choice. Supermarket shelves are groaning under the weight of options. To make matters worse, there is so much debate about the benefits and harm that come from consuming different types of fats.

You might think it is obvious that frying with vegetable oils has to be healthier than cooking with animal fat, like lard or butter. But is it really?

When you are frying or cooking at a high temperature (at or close to 180°C or 356°F), the molecular structures of the oils change, undergoing what's called oxidation – they react with oxygen in the air to form aldehydes and lipid peroxides. Consuming or inhaling aldehydes, even in small amounts, has been linked to increased risk of heart disease and cancer.

Experiments carried out at the Leicester School of Pharmacy revealed that oils that were rich in polyunsaturates, e.g. corn oil and sunflower oil, generated very high levels of aldehydes.

This was surprising because like most people I thought of sunflower oil as being "healthy". Moreover, the experiments showed that sunflower and corn oil are fine as long as you don't subject them to heat, such as frying or cooking.

Olive oil and cold-pressed rapeseed oil produce far fewer aldehydes, as do butter and goose fat. The reason is that these oils are richer in monounsaturated and saturated fatty acids, and these are much more stable when heated. In fact, saturated fats hardly undergo this oxidation reaction at all.

So, when it comes to cooking, use olive oil because lower levels of these toxic compounds are generated, and those compounds that are formed are actually less threatening to the human body.

So, what is the advice? Firstly, do less frying, particularly at high temperatures. If you do fry anything, minimise the amount of oil you use, and take steps to remove the oil from the outside of the fried food by tipping it onto a kitchen towel for a few moments.

When it comes to cooking it doesn't seem to matter whether the olive oil is "extra virgin" or not, and the evidence shows that the antioxidant levels present in the extra virgin products are insufficient to protect us against heat-induced oxidation.

Finally, always keep your oils in a cupboard, out of the light, and try not to reuse them as this also leads to the accumulation of unpleasant side-products.

Disclaimer: The author is not a medical doctor or a scientist. This information is the product of research at the Leicester School of Pharmacy. 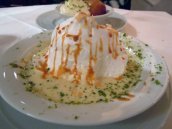