This essay was originally published
in Living France magazine

More than 100 varieties of olive trees are cultivated in France. They are endemic to the south of France and even often specific to a particular soil.

Since antiquity, the olive producer has played a very important role in the life of the Mediterranean populations, who think of them as sacred trees. The oil produced from the olives – in the Nice area, the variety is caillettier – has long been put to many uses: cooking, of course, but also for lighting, washing and heating. The Greeks used the olive as a form of currency, and claim to have had the first olive tree saying that it was given to the Goddess Athena and grown on the Acropolis. To destroy a man’s olive trees, they said, was an act of war. 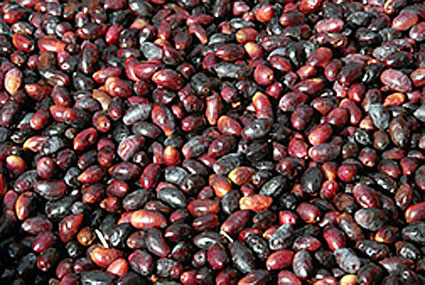 Bound for the French Riviera to investigate the mysteries of olive oil production, I was expecting to find olive oil in a number of guises, but I didn’t think I’d find it in ice cream. The Restaurant Issautier in Saint Martin du Var has a couple of Michelin stars, so you do rather come to anticipate something a little out of the ordinary. But, ice cream flavoured with olive oil?

Then again, when, a few days later, I visited the Restaurant l’Oliviera in Nice, it was with some surprise that I was served tiramisu drizzled with olive oil – well, it would have been a surprise, but by then I was taking it all in my stride. In the south of France, olive oil gets in on virtually every culinary act, or so it seems.

Many of the olive producers in Provence and Languedoc were wiped out by the severe frost in 1956, after which they switched to producing wine. This was a major turning point in French oléiculture. But in recent times, the production of olives and olive oil is back in vogue. The twenty-fifth of November, the Feast of Sainte Catherine Labouré, is officially the first day on which olives can be harvested, though in practice the seasons and the ripeness of the drupes (olives still on the tree) have rather more of a say in the matter. And gathering olives (La cueillette des olives) may well go on well into the following year, sometimes as late as March.

No-one seems quite sure how many varieties of olive tree there are. So numerous are the varieties of olive tree that there are fifteen species growing on the Riviera alone that cannot be identified, and which have survived since before 1956. They flourish all along the Mediterranean coast from Menton in the east all the way round to Perpignan in the Pyrénées-Orientales. In the Drome it’s the tanche, in Hérault and Aude, the picholine or the much-prized lucques (the so-called Rolls Royce of olives), a rare variety of olive grown in the region around Carcassonne. As well as being unusual, the lucques is also difficult to harvest by machine, making it extremely labour intensive. This unique olive has a light, nutty taste, crescent shape and bright green colour. 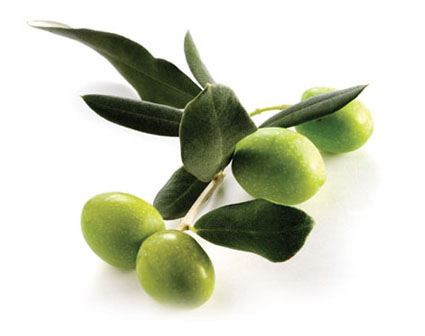 At the Palais des Olives in Grasse, a town better renowned for its perfume production, I joined a group of oil tasters, lined up like recalcitrant children with tiny spoons onto which Monsieur Butty dribbled small quantities of his precious oil, each tasting accompanied by an enthusiastic monologue, which left me with the impression that he had personally gathered every single olive, and probably had individual names for every one of them. As a child, I was spooned cod liver oil in much the same way, but there was nothing fishy about the samples in Grasse. The variety Negrette has a nutty taste, and leaves a light but very distinct peppery taste in the throat; Verdale has the scent of green apples and bananas, even artichokes, while the oil sold as Castelas is a blend of Verdale, Grossane, Picholine and Salonenque, and has a hint of cocoa and artichoke – an odd complexity, perhaps, but very flavoursome.

The olive oils described as 'Virgin' conjure up images of all manner of lush richness and purity. In fact, virgin olive oils offer a wide variety of tastes, depending on the type of the fruit, and the degree of bitterness and pungency. Extra Virgin Olive Oil has to be of exceptional purity, with a flawless taste and a level of acidity no higher than 1%; Virgin Olive Oil must also be flawless on the palate, but here the level of acidity must not exceed 2%. Naively, I suppose, I used to be beguiled by the labelling of olive oils as 'First Pressing'. But at the Restaurant l'Oliviera, Nadim Beyrouti explained that 'First Pressing' should be ignored simply because all subsequent pressings are now illegal in France.

'You should never cook with olive oil', he admonishes, 'because all the quality and perfume simply goes up the chimney. Use sunflower oil for cooking', he advises as he drizzles oils onto my salad, into my soup, onto the lamb and over that sumptuous tiramisu. I half expected him to drizzle some into my wine, but, thankfully, he didn't. 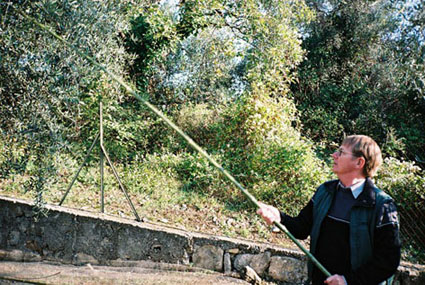 Gathering the olives is a tiring business; it begins as a bit of fun, but the humorous side of things soon pales. Producers drape nets around the base of the trees, and then give them a good shaking. Others use bamboo poles to thrash the branches of the trees, though these days there are more modern, less aesthetically pleasing, instruments of olive gathering. I found picking them by hand to be remarkably therapeutic, but inevitably there's a limit to how far I can reach up a tree without a precariously balanced ladder. And then there's the laborious, back-breaking session of picking up the nets, weeding out stray leaves and bits of branches, looking for any drupes that may be withered and past their best, because you can be sure the people at the mill will spot them, and too many poor quality olives could get your whole consignment rejected.

In Opio, I visited just such a mill, the Brague Mill, a bustling enterprise where olive oil is produced using both ancient and modern techniques. At the entrance a group of men were stacking sacks of green-black caillettier olives onto a palette to be weighed when one of the sacks spilled some of its contents. The ensuing maul to recover the bounty would have done the French rugby team proud: not one olive was overlooked – with minimum quantities in the region of 150kg of olives required to justify a dedicated pressing rather than a co-operative one, every olive had to pull its weight.

A few moments later, a less ambitious father and son team turned up hand-in-hand, pulling a toboggan full of olives; then a young couple, arms around each other as they carried a Casino supermarket bag that probably contained fewer than three kilos of the fruit. Quantity didn’t matter. Three or four kilos of olives would get you a little over a litre of olive oil, and there must be something very satisfying about having on the kitchen shelf a bottle of your very own olive oil.

Producers of much larger quantities can even – after a good deal of administrative paperwork and bureaucratic wrangling – have their oil approved as an AOC olive oil, the much-coveted Appellation Origine Controlée over which actress Carol Drinkwater and her husband wrangled for many long years. In fact, anyone fancying the idea of moving to the south of France to produce olive oil will find The Olive Farm, The Olive Season and The Olive Harvest contain a huge amount of useful information.

As for me, I'll never look at a bottle of olive oil in quite the same way, ever again.