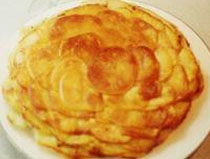 Pommes Anna is a classic French dish of sliced, layered potatoes cooked in a very large amount of melted butter.

The dish is generally credited with having been created during the time of Napoleon III by the chef Adolphe Dugléré, when he was head chef at the Café Anglais, the leading Paris restaurant of the 19th century, where he reputedly named the dish for one of the grandes cocottes of the period. There is disagreement about which beauty the dish was named after: the actress Dame Judic (real name: Anna Damiens), Anna Untel, or Anna DesLions.

A special double baking dish made of copper called une cocotte à pommes Anna is still made in France for the cooking of this dish. It consists of upper and lower halves that fit into one another so that the whole vessel with its contents can be inverted during cooking.

The dish can be made quite a few hours in advance, and then reheated, covered, in a hot oven.

Although this dish is really quite simple, it took a few attempts to get it as it should be; it's a question of adjusting the cooking temperature and time. But it is a splendid dish to place on the table.

·         Thickly butter a deep ovenproof dish and line the sides with potato slices placed close together and attached firmly to the butter.

·         Cover the bottom also and sprinkle with salt, pepper and brush with the melted butter.

·         Then cover with another layer of potatoes, seasoning, and butter and carry on till the dish is almost full.

·         Cover with buttered paper and cook for 25 minutes. Press down the potatoes a few times during cooking to help form a more solid cake.

·         Uncover and cook for a further 25 minutes, or until tender when pierced with a sharp knife.

·         Hold a heated plate over it and invert, giving a sharp tap as the plate is set down to turn out the contents.

·         The inside should be soft and the outside crust crisp and brown.

1.       Use a cast-iron skillet instead of an ovenproof dish, and start the cooking process by placing the skillet over a high heat for 2–4 minutes until the butter sizzles; then transfer to the oven.