The Scourge Of The Périgord

Traces of truffles have been found in 4000-year-old terracotta tablets discovered is Mesopotamia, the area between the Tigris and the Euphrates. For hundreds of years synonymous with banquets, conviviality and unforgettable moments of savoury delight, the best truffles in France are (arguably, very arguably) found between the Lubéron and the slopes of Mont Ventoux.

During the 14th century, when the Papacy was in Avignon, the popes, their cardinals and archbishops brought with them a passion for good food and wine, including the truffle. But it was during the 19th century that man’s love affair with the truffle really began, when Joseph Talon and Auguste Rousseau, both from Carpentras, had the idea of cultivating truffles; it was a project that never really quite succeeded. 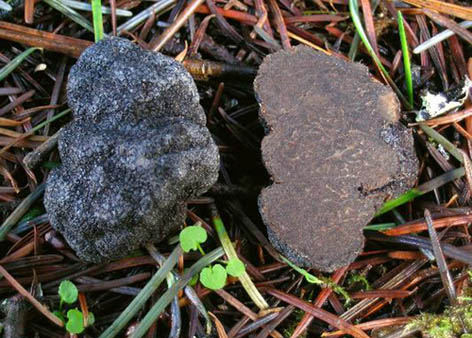 At a mundane level the truffle, a rough, misshapen and visually unappetizing black gobbit of fungus, is renowned for its gastronomic, aromatic and dietary qualities. Also not to be confused with these black truffles.

In medieval times it was used for medicinal purposes, as a cure for all sorts of pain, gout and general debility. Until as recently as the 19th century, doctors prescribed truffle water as a cure for vomiting and diarrhea.

But it is largely thanks to it gastronomic qualities that the truffle is highly regarded today. It is, by common consensus, the noblest and most individual of all French delicacies. Known as ‘the Black Diamond’, the truffle is often described as a subterranean mushroom, but one that lives in symbiosis with a tree, usually an oak or hazel.

There are dozens of truffle varieties, but the finest is the Tuber melanosporum, a winter truffle called the ‘Truffe du Perigord’ in the south-west of France, and ‘rabasse’ in Provence. And although truffles can be found in many places, even as far afield as New Zealand, it is Provence that provides 80% of the truffle crop, mostly through its truffle markets in Carpentras in the Vaucluse and Richerenches in Tricastin, north-east of Orange.

The Marché aux Truffes in Carpentras is an intimate, quiet affair. Soft music drifts from a balcony window, somewhere a dog barks and even at this early hour the bars are doing a brisk trade in slugs of marc or Calvados. All around small groups of men and women are gathering conspiratorially, speaking in low tones, feeling, squeezing, weighing, assessing the product. Transactions are made surreptitiously, usually in cash, because, as Peter Mayle explains ‘the truffiste is not anxious to participate in the crackpot government scheme the rest of us call income tax.’

Truffles are collected from mid-November until mid-March using either a dog or a pig. Dogs are not naturally inclined to detect truffles and have to be trained, making the dog itself a highly valuable ‘tool of the trade’. Curiously, it is rarely a pure breed of dog that has the knack, but a mongrel, rough-and-ready dogs that have developed a flair for seeking out truffles.

Pigs on the other hand are drawn to the aroma of the truffles, which for them contains sexual hormones attractive to their kind. But a couple of hundred kilos of determined pork can prove remarkably uncooperative when hovering on the brink of porcine ecstasy, and the owner needs to be alert, strong and resourceful if he is to save the truffle.

Not surprisingly, when a pig finds a truffle its instinct is to eat it, and the resulting tussle can be quite dramatic; the man usually wins, but the pig (or dog) must be rewarded. Pigs, however, are not disposed to wandering over the large areas necessary to find the truffles. So, many hunters carry their pigs in a wheelbarrow or under their arm until a sudden squeal of delight announces the proximity of a truffle. Today, some truffle hunters do without either dog or pig, and just use their noses and a certain 'Je ne sais quoi' to find the truffles.

Apart from the taste, which puts it on a culinary par with saffron, foie gras and caviar, the truffle was long held to possess aphrodisiac properties. Almost inevitably, given the French predilection for debating matters gastronomic, opinions are divided, but you certainly won’t get any French chef trying to dissuade you from the notion. Sadly, the only evidence to support the claim is that the odour of the truffle contains alpha-androstenol, a chemical thought to be a pheromone and clearly attractive to pigs.

Whatever the case, the truffle, a humble globule of highly prized fungus that matures through the harsh winters at the foot of Provençal oak trees, is undoubtedly in a league of its own.