French herbs are used in most French cooking and French cooks would never be without herbs in their kitchen. 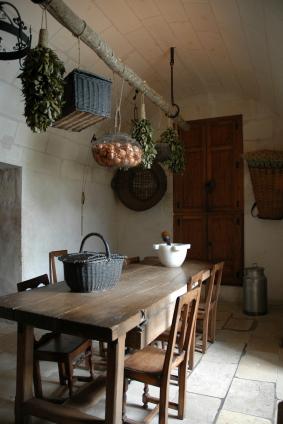 They are indispensable if you want to capture the flavour of real French cooking.

The French cook is able to turn the most inexpensive piece of meat into a meal sure to make your mouth water simply by using a selection of herbs, a little wine or vinegars, some spices, or any other commodity in their essential kitchen cupboard.

Dried herbs are of course invaluable but in France they are only used when the fresh herbs are not available.

You should buy dried herbs in small quantities and keep in an air tight container, in a dark cupboard.

French herbs have that wonderful full fragrance when fresh which is contained in the oils of the herb and released during the chopping or pounding or when frying in oils. So they are much better for your cooking!

The most famous or classic mixture of French herbs used in French cooking is the Bouquet garni, the Fines Herbs and Herbes de Provence.

Bouquet Garni Or "The Broth Posy’

This is a small bunch of French herbs tied together and used in French cooking.

It usually consists of three stalks of parsley, a sprig of thyme and one bay-leaf.

The thread which ties them helps facilitate the removal of the herbs at the end of the cooking.

Other additions to the Bouquet Garni are a small stick of celery, a sprig of marjoram, and in Provençal cooking a piece of dried orange peel is often used too.

Fines herbes is often seen in French recipes and it consists of equal amounts of French herbs such as chopped fresh parsley, chives, chervil and quite often, when available, some tarragon.

Used in a wide range of Provençal dishes, Herbes de Provence are easy enough to make if you have a supply of dried herbs.

Simply put 2 tbsps each of rosemary, thyme, basil, marjoram and parsley, and 1 tbsp each of fennel seed, oregano and tarragon, together in a mixing bowl; mix thoroughly and store in an air-tight container. 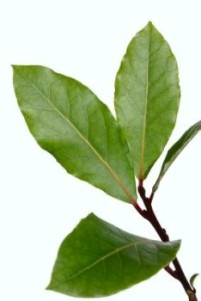 The sweet bay or bay laurel is a perennial evergreen tree which is the only form of laurel to be used in cooking.

Bay is grown from a small plant and needs protection during the cold weather.

They can be grown in tubs and make beautiful displays for your garden and growing herbs is easy this way.

Bay leaves are shiny, smooth and dark with a strong aromatic scent. They can be picked for use throughout the year.

Bay can be used either dried or fresh to flavour sauces, stews or used in marinades.

It is indispensible in a bouquet garni, or ‘the broth posy’ as it is also known, when used to flavour good cooking.

Bay adds its spicy flavour to meat and vegetables, fish, soups and stews.

You can store a leaf or two in a jar of rice or add it to your rice pudding for a delicious flavour. 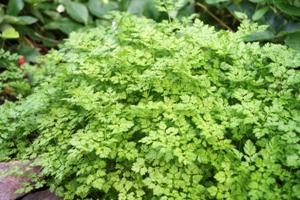 Chervil is a delicate herb almost fern-like with a refreshing spicy flavour.

It can be used generously so you could grow more than one plant in your garden.

It can grow to about 45cm/18ins tall and its leaves resemble those of French parsley and it has clusters of small white flowers. It is grown from seed in the spring or summer, and inside in winter.

The leaves have a delicate flavour and are used to enhance vegetables, chicken, fish, veal, salads, egg dishes and tomatoes.

It is a favourite one of the French herbs for giving flavour to soups, sauces and omelettes. 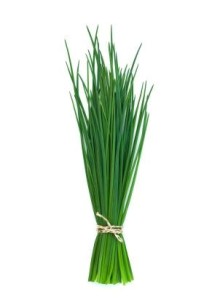 Chives are an important herb in the French kitchen and they have the most delicate onion flavour which make it a wonderful seasoning for many dishes.

Chives are a hardy perennial plant grown from a clump of bulbs planted in autumn or spring. You can increase them by dividing them.

They can be grown from seeds but it is a slow process. It is easier to divide the established clumps.

They can be grown in window boxes and tubs as well as the garden.

The flowers are very beautiful in a shade of lavender pink and can also be used in salads. They make a really stunning display when in flower.

The grass-like leaves are used to garnish soups, salads, egg dishes, fish, chicken and veal. They are delicious with salads and most vegetables. 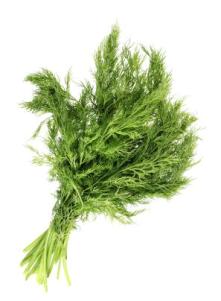 Fennel is a beautiful tall and graceful perennial herb with fine feathery green leaves and bright yellow flowers. It looks very much like dill but the flavour is a sweet anise which is very different.

It can be grown from seed in early spring and the main plants divided every three to four years.

Fennel is most well known with fish and the seeds or leaves give an excellent flavour when added to the water for poached or boiled fish.

The leaves give a wonderful flavour to fish sauces or will counteract the oiliness of rich fish.

The leaves can be added to salads or raw or cooked vegetables.

The seeds can also be used whole or ground to flavour bread, dressings, savoury biscuits, soups and many sweet pickles.

The bulbous root used as a vegetable comes from Florentine variety but this is much more difficult to cultivate. 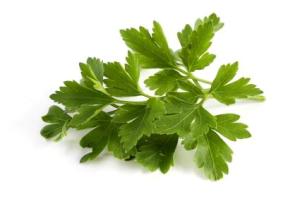 All varieties of parsley are hardy biennials but mostly treated as annuals.

Of course no herb garden would be complete without its parsley!

The two most popular ones are the curly leaf parsley and the French or the flat leaf parsley which undoubtedly has the better flavour.

It is rich in vitamin C, so it is valuable in your diet.

They can be grown from seeds but they take about three to four weeks to germinate.

It is a good edging plant in your herb garden and is also suitable for containers inside or outside.

The amount of parsley you use to flavour dishes is very much a matter of taste but as a general rule you can add it generously.

The chopped leaves can be added to green salads, soups, sauces and cooked vegetables.

It is beautiful when fried in oil until crisp and added to accompany fish.

Parsley added to dishes with garlic will soften the flavour. 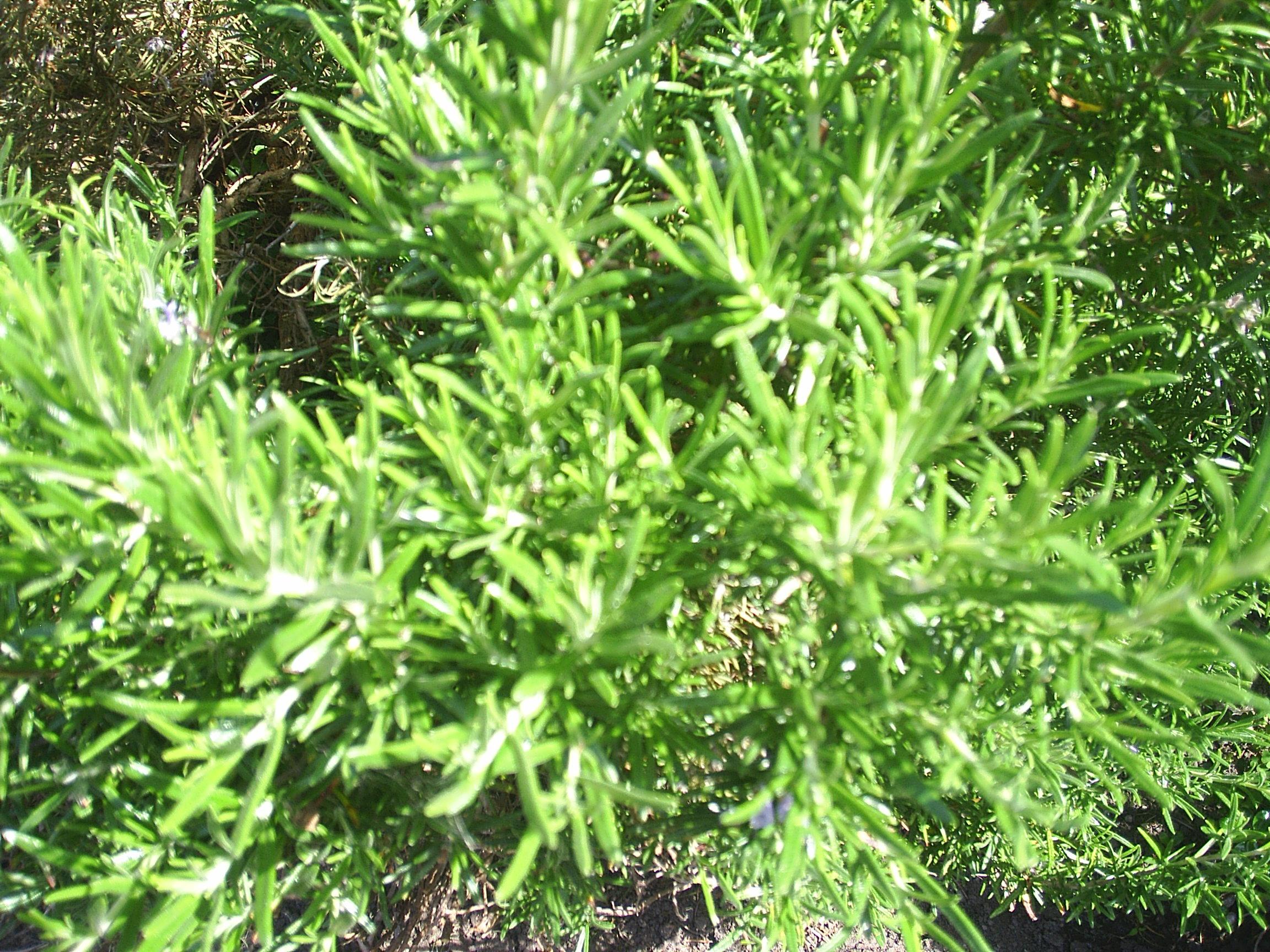 Rosemary is a relative to the mint family and the name is derived from its Latin origin to mean "dew of the sea."

Rosemary is very common in Mediterranean cuisine and has somewhat of a bitter astringent taste to it.

Growing herbs is easy with Rosemary as it is one of the French herbs that can be grown from cuttings or from a small plant in spring.

The leaves are short, narrow and tough rather like pine needles.It grows quite bushy and needs some cutting back once established.

It makes a wonderful shrub with a strong aromatic smell and is the perfect addition to your herb garden.

Rosemary added to lamb is a classic favourite but is equally good with other meat dishes and with fish such as halibut.

Try it with eggs and cheese , in biscuits/cookies, jams and jellies.It can also be added to fruit salads, wine and fruit cups for an unusual flavour. 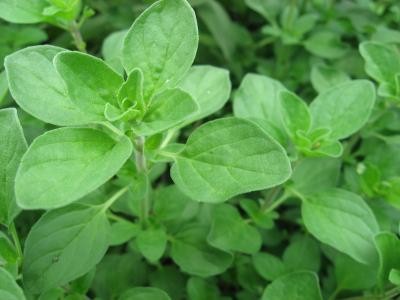 Marjoram is a relative to the mint family. You get the most flavour from Marjoram if you use the fresh leaves rather than dried marjoram.

There are three types of marjoram but it is the sweet marjoram that has the best flavour for cooking.

It is a compact and bushy plant with small flowers which look like little green knots.

Sweet marjoram is grown from seed in the spring and the seedlings planted out in early summer.

Although Marjoram is sweet and mild, it is also at the same time minty and has a hint of citrus.

Excellent with meat especially meat loaf and vegetables such as marrow and potatoes.

Some added to the rice in stuffed green peppers makes a wonderful tasty dish.

Often included with other herbs in a bouquet garni. 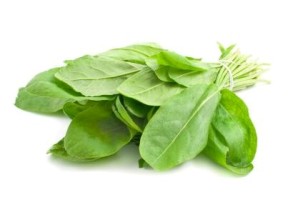 The true French variety of sorrel is the best to use for your cooking as it has the best flavour.

Sorrel has lovely fleshy green leaves and has an astringent flavour.

It is grown from seed sown in early spring and it prefers a moist humid rich soil.

It is a slender plant about 60 cm high, with edible, oblong leaves.

It has whorled spikes of reddish-green flowers, which bloom in summer.

This is one of the French herbs often served as a purée or to give a good flavour to sauces, omelettes or soups. 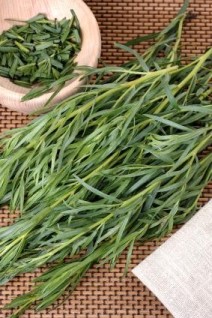 Tarragon is a herb with a distinctive flavour and one of the best culinary French herbs for savoury cooking .No French cook would be without it!

Tarragon is a perennial herb and is grown in a sunny position in well drained soil. It is best grown from rooted cuttings in the spring.

The leaves are shiny and narrow and it has tiny greenish white flowers that only open in a very warm climate.

Tarragon leaves give a good flavour to green salads and raw vegetable salads.

Steep the herb in white wine vinegar and you have a wonderfully flavoured tarragon vinegar.

Tarragon can be added to roast meats, poultry dishes and fish dishes.

Use it in a light buttery sauce to accompany mild vegetables such as marrow or artichokes. 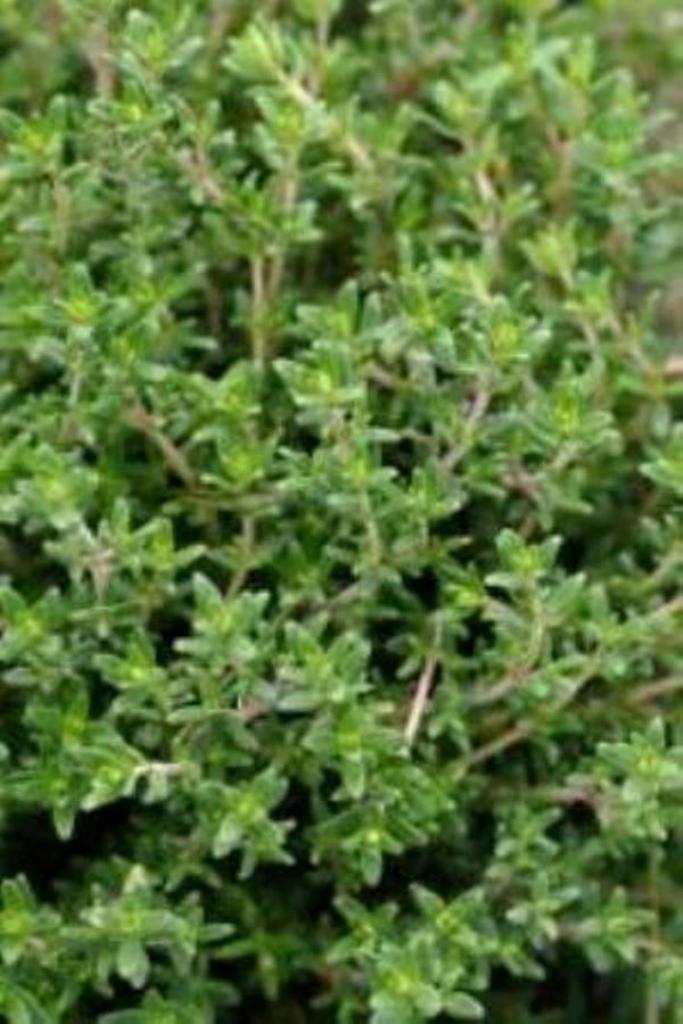 Thyme is one of the essential herbs when making a bouquet garni.

It is a spreading evergreen plant and grows up to 45 cm high.

It has lots of little mauve flowers in the summer for about a month.

It is grown from seed in the spring and can also be grown from the division of an old plant or from cuttings.

It’s a great plant for the rockery where it needs little care!

It can also be grown in window boxes and used throughout the winter.

Thyme has a strong flavour so should be used sparingly.

It is added to meats, fish, soups, stews, and of course herb sauces.

There are many more wonderful French herbs to use in your cooking, but I hope that these have given you a sample of some of the most popular ones used in French cooking.

You will now be able to recognize them from the photos as they look so different when dried and packaged.

If you are lucky enough to have a garden to grow your own French herbs that is great, but for those of you who do not have the room for this you can grow them very well in containers both inside and outside.

A few pots on the windowsill will give you a selection of herbs for a few months.

And as you pick them they will grow again! 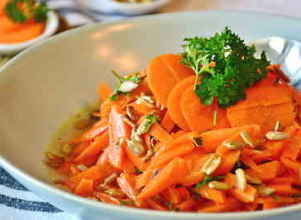 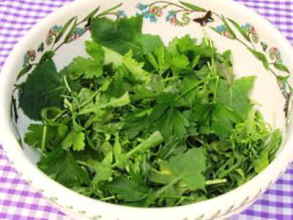 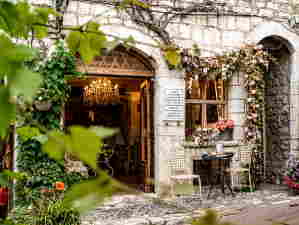 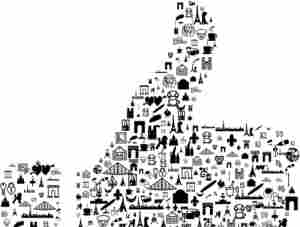 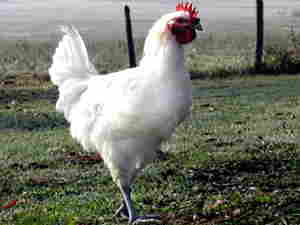 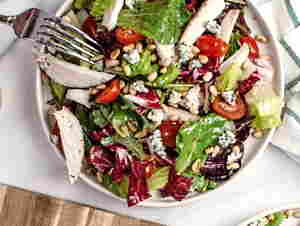 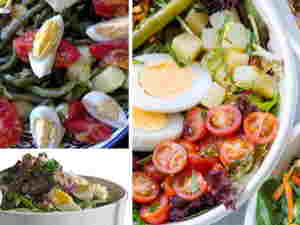 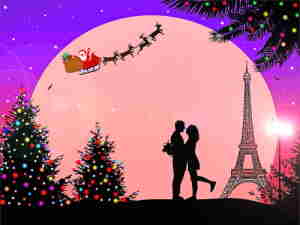