France is rich in its historical and natural heritage, but it is rich, too, in the diverse produce it uses to help create some of the most remarkable dishes you are ever likely to encounter.

When you think, gastronomically, of, say, Normandy, you tend to think of cider and calvados; with the Périgord it's truffles, while almost anywhere around its magnificent coastlines turns the mind to sea food.

And while the French themselves acknowledge these 'liens', these links with what they call 'terroir' – even though no-one can adequately translate the word – there are, they generally agree, products that are emblematic of France, and, in gastronomic terms, Sites Remarquable du Gout where by common consensus (and frequently mild disagreement) the very best are to be found. 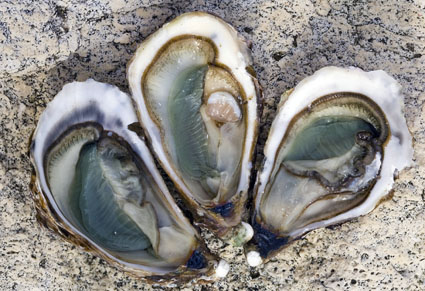 When, a few years ago, watching the Tour de France as it charged through Cancale, instead of admiring how the cyclists powered up the road out of town that I'd struggled to walk up, my mind instantly thought 'oysters': intense protein, no cholesterol, no fat, just great, healthy seafood goodness.

Along with my son and brother-in-law we did the oyster farmers of Cancale proud.

Take Cancale, a small coastal town on the northern edge of Brittany, not far from St Malo, and on the bay of Mont St-Michel.

It's a quiet, fairly unassuming place, except when the market is in town.

But wander down to the sea front and along to the quay and there you'll find the ramshackle sheds of oysters vendors, with a selection beyond imagining.

Well, you might think, an oyster is an oyster, but buy half a dozen, more if you especially like them, maybe three of four different varieties, and perch yourself on the sea wall to eat them, with or without a dash of lemon.

That's when you realize there is a difference, an oyster is not just an oyster, it is a subtle nuance blowing on the wind, a caress your palate cannot ignore, an atmospheric blend of flavors, sensations and notes that would please even Debussy's melodic imagination... savoring an oyster is like being kissed by the sea...on a calm day at least.

Once, before I became a devotee of oysters, I was having lunch in a Left Bank restaurant in Paris.

At the next table, a man ordered two dozen oysters in four varieties, and, I confess, I thought him overly pretentious, and even more so when he swept into an intense dialogue with the waiter about the subtleties of each. 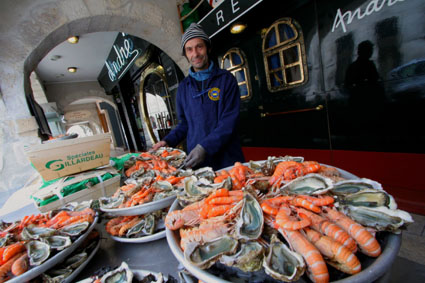 But I was to learn, and, quite by chance, made a start with oysters from Marenne during a visit to the Ile d'Oléron, one of the leading oyster-breeding sites in France.

Marennes used to be an island in the gulf of Saintonge, but is now part of the mainland, on the right bank of the river Seudre.

Here I met Dominique Richiero, who with her husband Baron, is an ostréiculteur (no, I can't pronounce it either), having extensive oyster farms, and set on producing only the best.

Breeding oysters takes patience, she tells me, it takes four years for an oyster to reach the restaurant tables.

Oysters lay their eggs in the summer, and these tiny seeds are fixed to 'collectors' – other shells or broken roof tiles.

The young oysters are then separated and placed in oyster beds, where they are allowed to grow into adults.

They then mature in special pools, claires, where they acquire trace elements and mineral salts which in the case of the Marennes oysters give them a distinctive green hue.

In this part of France, oyster cultivation began in the 19th century.

They are truly superb.

I know because Dominique pulled up a tray of oysters from a holding tank, opened one, and gave me a quick lesson in oyster anatomy before offering it to me.

It was sea-salty, as you'd expect, quite a mouthful and rather chewy in a very palatable way, you try not to think about its beating heart as you swallow. 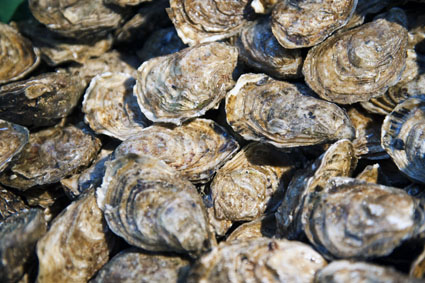 But, and this is where the French love to disagree, not many months earlier I had dined on the shores of the Lac de Thau, at a fine restaurant at Bouzigues in Hérault in Languedoc-Roussillon.

The Mediterranean has long had an enviable reputation for the most succulent fish and seafood, especially oysters and mussels.

Eighteen varieties of shellfish are taken from the Étang de Thau, and no fewer than 750 producers farm 2,750 oyster tables and take some 13,000 tonnes annually, about 8.5% of France's total consumption.

Oysters from the Étang de Thau are marketed under the name of huîtres de Bouzigues (Bouzigues oysters) after the village where oyster production started.

They are a flat variety, fixed with cement to ropes, and immersed in the water until they reach a size suitable for consumption.

Thau water is graded A, and so shellfish can be caught and consumed within minutes.

The lake is also part of a larger lagoon complex that blends sea water with fresh water, and it is this that gives Bouzigues oysters are very distinctive taste.

Now, I'm not naive enough (yet) to be drawn into pronouncing any one oyster-of-origin better than another: Cancale was a serendipitous breeze that edged us towards the oyster producers; Marenne was a baptism into the world of oysters, and Bouzigues? Well, I was dining on the freshest oysters, at sunset, gazing out across the lagoon, in the company of two beautiful women, what more is there to life?